Picture and A Story 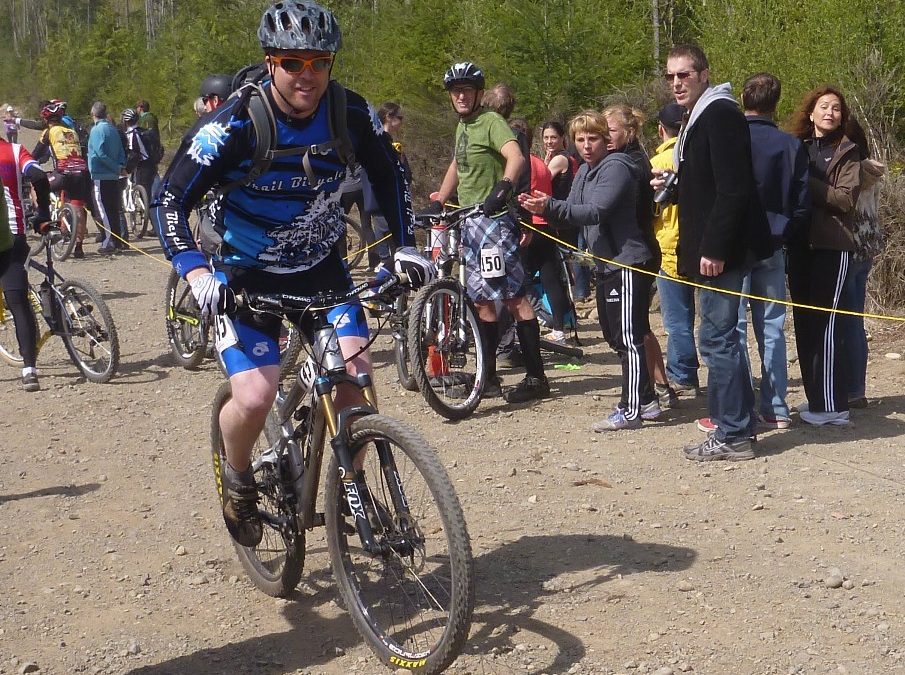 Me, riding my Banshee Prime, in lycra at the 2013 Snow-to-Surf Adventure Relay race. Thanks to my most awesome girlfriend for all of the race support and for the picture taking!

I often wonder if there was ever a bear. On that pitch dark night the Warrant Officer sure thought so, to the point where throwing an arty-sim[c1] into our trench made sense. As the fuse whined down on that quarter stick of dynamite, my trench mate and I scrambled out and away. After the “bang”, I didn’t want to hang around, so I am pretty sure the bear left. If there had been a bear there at all…I think the Warrant Officer was more dangerous than any bear we may have run into.

It was an unusual way to spend a summer at the age of 22, and for me, more frustrating than I care to remember. It was a summer that marked one of my biggest surges of confidence linked with one of my worst crises of confidence. The summer of 1996.

As I sift back through the fading memories almost sixteen years later, it comes back in flashes and bangs like the explosives we were taught to use. Like the artillery simulator our course Warrant Officer tossed in our trench to “scare off a bear” that night. It is a good thing we were all so fit, and could move as fast as we could, otherwise this story might have had a very different ending.

I had just finished Military College with a perfectly average civil engineering degree. For some inexplicable reason, I had elected to transfer from the Airforce, where I would have gone on to train as an air-navigator, to the Army, where I was to learn to be a Combat Engineer. To this day I still have some trouble explaining this decision, although in the end, it has served me well.
That summer, in the Chilcotin, I faced the biggest challenge of my life – I faced myself – I faced the bear.

I was young, fit and cocky, but plagued with a level of indecision in a crisis that, upon reflection, makes it amazing I made it as far as I did. I would freeze in simulated combat, but only when I was “in charge”. As a “follower” or even as “second in command” I had no problems taking the lead when necessary and taking the risks required to succeed. But put me on top, and I couldn’t make it happen.

This all came to a crux when we were practicing helicopter landings. One of my best buddies was serving as “directing staff”, so he knew what was going on – what our instructors had planned for us. He warned me ahead of time of what was going to happen and what I needed to do to “pass” the exercise. It didn’t help. As soon as we ran out of the back of the Chinook helicopter and came “under fire”, I froze. All I had to do was yell “Ambush – Charge Front” – but I couldn’t. I could hear the “Myles Gear” starting to beep from my section mates as the “enemies’” infra red lasers hit their sensors with each blank round expended, and I knew I was screwed. The Sergeant who was our main instructor eventually, and with much disgust in his voice, had to call the “enemy” off and get us out of the drop zone so the next section could land. Failure – complete and absolute. The bear slinked off, angry and confused.

I was beginning to realize that for all of my accomplishments in life so far, I really couldn’t get it done. During “defensive training” I was put in charge of our section and tasked with building barbed-wire fence obstacles. I failed at that too. The bear lashed out. After, I had a life changing conversation with one of my course mates, Max. He was from Quebec and spoke English with that stereotypical Quebecois accent. Max told me point blank that I was a total asshole and no one was willing to listen to me or follow when I was in charge. Add to that my failure with getting off a “hot LZ” and my internal will was beginning to crumble.

Somehow, I pulled it together.Somehow, I kept going.

I was given another chance to lead the section in a simulated assault. A simpler problem, and somehow I limped through. Even when my designated “trench clearer” failed to get off the ground and charge – even with a loss in momentum. After, the Sergeant said “It’s not a pass, but it’s not a fail either”. A glimmer of hope? Did I catch a glimpse of that bear?

That summer, at 22, I had to change how I dealt with everyone, I had to learn how to not be an asshole. As a 22 year old, that’s a pretty tough challenge. I realize now that I really didn’t know very much – not about people anyways. Sure, on paper I had a professional degree. I could design buildings, water treatment systems and landfills. I was “functionally bilingual” in French and English, and could write my way out of most any problem. All great on paper – all great in academia – but not much value with the ultimate problem of all – people. For that, I needed to master the bear.

I was given more opportunities. I realize now that despite the instructors constant “riding” of us: the yelling, the tear gas at breakfast, the “running up and down the hills”, they really did want us to succeed. I noticed this especially as I was, for some reason, so determined to fail. In all my life to that point I had never failed at anything. In fact, most things had come relatively easy. But this, this challenge, this was different.

Through sheer willpower and determination I eventually made it turn. I was given another chance (looking back it was very generous of the instructors to give me so many). I had to get a “tripod” built in the field to lift up a jeep. Engineering!

This was my chance and I worked tirelessly to demonstrate all of the “leadership” lessons I had been taught. I had to inspire my section, not berate them. When you are under immense stress, haven’t slept, are looking at washing out, the bear can take over; it’s difficult to inspire – it’s far easier to criticize. I recall this particular field problem so clearly because it marked a change in fortune for me. A change in my life. After the tripod, I was given the chance to lead a patrol. The whole time, all I could think was, “fuck – I’m failing again…”. But I kept my head down – I dug in – I pushed through; somehow it didn’t fall apart. Somehow in the pitch black woods of Chilcotin, I lead my two man reconnaissance team back to link up with the other four members of the section. Somehow we found our way back to the base camp. Somehow I harnessed the bear.

At the end of the summer, my course office summed it up very succinctly “For fuck’s sake Gower, you’re fit and you’re smart, just believe in yourself!”.

He was right, of course. Next summer, when I had to go back to the Chilcotin one more time, I didn’t fail at anything. I had found my confidence. I had found it in myself where it had been the whole time, I just needed to learn how to use it.

As I look back, I now realize that that moment, that crux in my life has shaped who I am today.
I now know there was a bear in the trench – in fact the bear was with me everywhere I went. A bear I needed to control, a bear that lives within me that can give me great power.

A bear I have to constantly master.